Are All Calico & Tortoiseshell Cats Female?

Are all calico cats female? Are all tortoiseshell cats girls? You’ve probably heard before that they are. It’s an interesting example of how genetics dictate some pretty predictable results. Or do they? After all, it certainly wouldn’t be the first time something resembling an old wives tale is taken as fact with few questions asked and shoulders shrugged in reply. 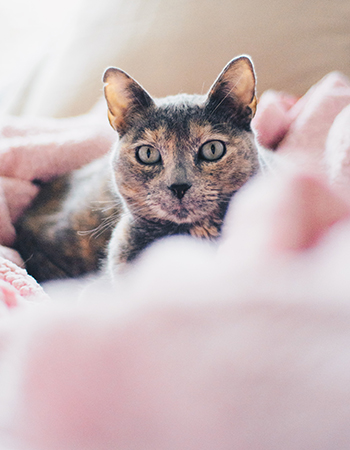 The actual, scientific fact of the matter is that most calicos and torties are female. There are some rare exceptions! According to a study by the University of Minnesota College of Veterinary Medicine, only about 1 in 3,000 calico cats are male!

It’s All About Chromosomes

Orange coloring in cats comes from a gene in X chromosomes. High school biology refresher: females have XX chromosomes. Males have XY chromosomes. So, it stands to reason that either a male or female cat can be or have orange coloring. The girls, though, are commonly calico, tortie, or orange tabby whereas the vast majority of males are only orange tabby. (This has led to the misconception that only male cats are orange tabbies; actually, most are simply because girls have more chance to be other variations with orange.) This is because only a cat with XX chromosomes can be calico or tortie.

So How is There Ever a Male Calico or Tortoiseshell Cat?

It’s a genetic anomaly! Rarely, a cat—or even a person—has three chromosomes. So a male with XXY has the two required X’s to possibly make him a rare and beautiful kitty indeed. These XXY guys are called Klinefelter males, after endocrinologist Harry Klinefelter who first identified the condition in the 1940s. Now, don’t think that just because it’s possible to get a rare coloring in a male cat that you might be able to breed for this trait. The vast majority of cats with three chromosomes are sterile. That’s part of why it’s so rare to begin with. So if you have one, just cherish him for the rare multi-colored, autumn-kissed jewel that he is!

Some Kibble for Thought

Being sterile also means that many people assume that these male cats don’t need to be neutered. For their own health (and sometimes for your olfactory-related sanity), they should be neutered. They still behave like any other unneutered cat. They are more likely to spray urine to mark territory, roam far and wide looking for girls and fighting other males which often result in injury or severe disease, and they are far more likely to develop testicular tumors.

Do you have a male calico or tortoiseshell? We’d love to meet him!